Our assembly each Monday celebrates when our children use the 'Secrets of Success' to achieve their goals. Their successes are awarded with special stickers and they are given the opportunity to either show their learning or talk about their successes. Our optimism and positive attitudes are mirrored in the achievements our children make. The development of a growth mindset removes the fear and obstacles and enforces the 'can do' culture we instil in our children. So we tell our children when they say they can't, we add.. yet! 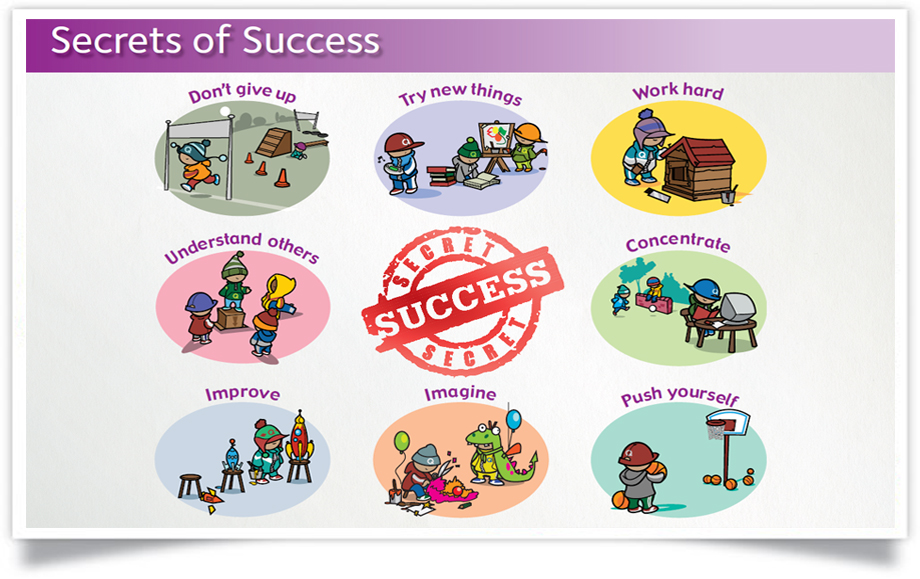 It is important that we all experience success.  Finding something that we are good at builds confidence. Some pupils may not be good at the things they spend most of their time doing at school, which can make it even more important that schools have a broad and rich curriculum with something for everyone. As adults, however, we learn that just because we may be good at something doesn’t necessarily mean that we enjoy it. Successful people enjoy what they do. In fact, they love what they do.

This is something that most of us don’t want to hear. If we want to get really good at something, there are no short cuts. Accomplishment is all about practise and hard work. Pupils need to understand the benefits of working hard. They need to know that work is good and not something that should be avoided. Many pupils become frustrated if they don’t accomplish something immediately. It is important to teach them that it may take hours and hours of hard work to become really good at something and that in real life success does not come easily.

In 1968, George Land gave 1,600 five-year-olds a test in divergent thinking. This involved finding multiple solutions to problems, asking questions and generating ideas. The test results were staggering: 98% scored at what he described as ‘genius’ level. He then re-tested the same children at age ten, by which time the level had declined to 30%. By fifteen years of age, only 12% of the children scored at the genius level. The same test given to 280,000 adults placed their genius level at only 2%.

The test shows what most of us know: children have a fantastic imagination, which mostly declines with age. To help children to be successful we need to help them to keep having ideas as they get older.

Successful people are always trying to make things better. This doesn’t mean there is anything wrong with what they have but they know that there is always room for improvement. They try to make good things great. Rather than making any radical transformations; however, they tend to make lots of small adjustments. This is what we can teach our children: great things do not happen suddenly. They are the result of lots of tweaking and refinement. We can all make things a little bit better. We can all take small steps to greatness.

Successful people have bad luck, setbacks, failures, criticism and rejection but they always find a way around these problems. Children need to understand that if they have bad luck, they are not alone. Most of us tend to focus on the accomplishments of successful people rather than their mishaps or setbacks. We need to tell children about the times we failed, were rejected and criticised but also how we bounced back.