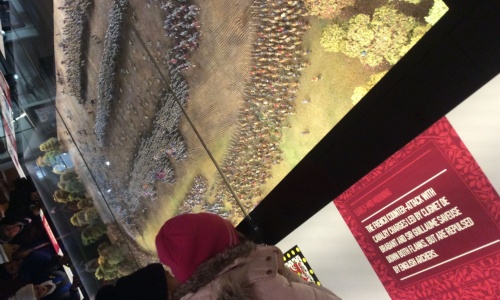 Our trip to the Royal Armouries Museum

Year 4 had an unforgettable opportunity to visit the one and only intriguing and historical Royal Armouries Museum. What an amazing trip it was! During this interesting experience, we learned fantastic defence skills using shields and mighty swords. We all worked together to make a ‘tortoise shell’ which acted as a barrier against the Romans’ enemies – the Celts. We also learned about King Prasutagus and how he died, leaving vengeful Queen Boudicca to fight for freedom. They were fed up of paying taxes to the Romans. They had to give away their food, money, gold, silver, jewels and wool. Celts would go to battle wearing war paint. We even had a chance to hold mesmerising, fearsome weapons like swords, daggers, battle-axes and lengthy spears. We had so much fun listening to instructions like: ‘stand up straight’ and ‘march forward!’ shouting right and left in Latin (sin, dex). We also witnessed the most mind-blowing fight between a Celt and Roman! What a fight it was! We would love to visit again any day!