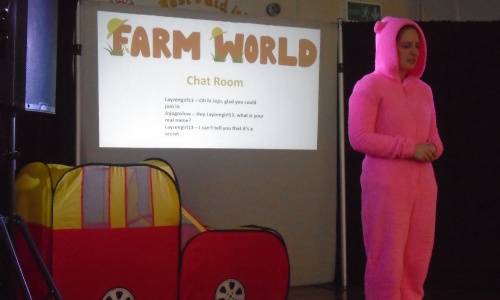 'To celebrate Online Safety Day, Warwick Road was paid a visit by the 'One Day!' creative company; they delivered a performance entitled 'Level Up' which was designed to educate children about the potential dangers of online gaming. It was an interactive performance, adapted for both KS1 and KS2, whereby the children had to help the online character of JoJo to stay safe. Children were informed about: identity theft, pop-pops, 'cookies', in-app purchases and inappropriate content.'

Throughout the day all classes watched videos and did classroom exercises in order to help with awareness of potential problems they may encounter online. One of the key points we covered was who to contact and/or talk to in order to get help when needed.

When we spoke to children about Online Safety they had the following things to say.

'Inspired by the e-safety performance, children in Year 6 were tasked to write a persuasive argument; this would either be in favour of online gaming or against it. They spent a session collating ideas and then they discussed how they could ensure how the arguments were fair and unbiased.

Below is the work produced by Khadija and Talhah from Class Cygnus. Both children offered arguments that were logically structured and maturely argued. Talhah was in favour of allowing children in Year 6 to play games online, while Khadija was against the idea.'

Download some of the work from our children below