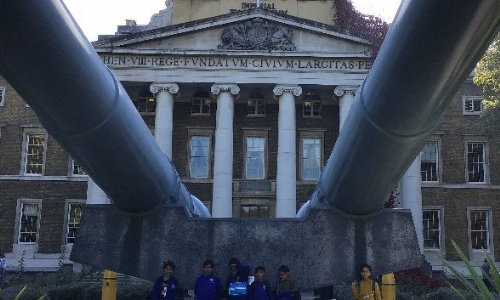 On Friday, 5th October 2018, Year 5 children visited the London Imperial War Museum. The journey to London was an exciting, memorable experience for the children!

As the children entered the museum, they were greeted by a dramatic display featuring a Harrier jet and Spitfire plane suspended above a V-2 rocket.

The children were given the opportunity to discover the story of the First World War through the eyes of the British people and the Empire, both on the home front and the fighting fronts. On display were over 1,300 objects including weapons, uniforms, diaries, keepsakes, film and art which the children were fascinated by. Many children enjoyed walking through the recreated trenches with a Sopwith Camel plane swooping low overhead whilst a Mark V Tank loomed above them.

Throughout the trip, the children were very inquisitive and asked many questions regarding the things they had seen.

As a bonus, the children were lucky enough to receive a guided city bus tour of London; they were able to experience the magical sights and sounds of London.