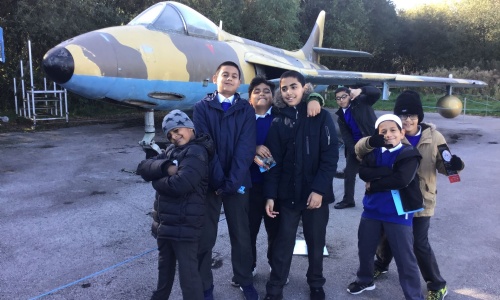 On Monday, 10th October, to mark the end of their 'A Child's War' unit of work, children from Year 6 visited The Yorkshire Air Museum.

During a short introduction, children learned about the origins of the first flight and the subsequent development of aviation.  Museum guides will then took the children on discovery tours of the various stages and applications of early flight development through to the use of aviation during both WWI and WWII. As part of this activity, the children were guided through the ‘Gasbags to Super Zeppelins’ display to look at early military flight during WWI, followed by a ‘hands-on’ activity in Handley Page Hangar and we finished in the main T2 Hangar to discover WWII bomber and fighter aircraft. Excitingly, we got to spend some time in the Air Power Zone where pupils could play and get to sit in open cockpits. Afterwards, we were able enter a large plane and role-play parachuting.

During all of this, speakers blared some of the music from World War II that we have been analysing. Some children 'treated' staff to their wonderful rendition of Vera Lynn's 'We'll Meet Again'.

Children were very enthusiastic about the trip and asked some insightful questions throughout. In fact, it was decided that we will extend the unit for a few more weeks as children asked for us if they could study some of what we learned today in further depth.