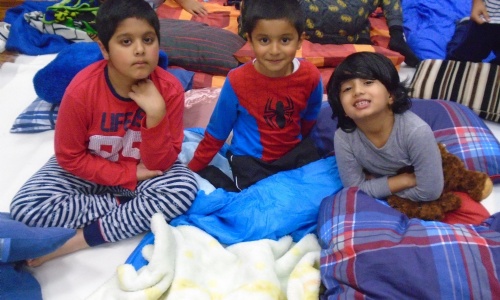 We held a sleepover in school during October which was extremely popular with the 50 pupils who attended.  It was a winner with our parents too as they had a free night to spend how they want.

The children arrived at 7.30pm and were keen to choose where they wanted to sleep.  Once everyone was settled; we had our evening meal followed by a movie.  The shrieks of laughter confirmed just how much they enjoyed the movie.  Laughing is thirsty work so they were glad of the midnight treat, hot chocolate and a snack.  There is something exciting about hanging out with your friends, staying up that bit later, midnight feasts and talking after lights out.

Just before lights out, we read our bedtime duas.  There were lots of whispers under the covers but eventually, everyone fell asleep….ZZZzzzzzzzz

The children were up bright and early and enjoyed a scrumptious breakfast. The fun continued right up until parents collected them. The girls particularly enjoyed the chocolate games.

This event was extremely popular with the children who attended; therefore, we intend to make it an annual event.