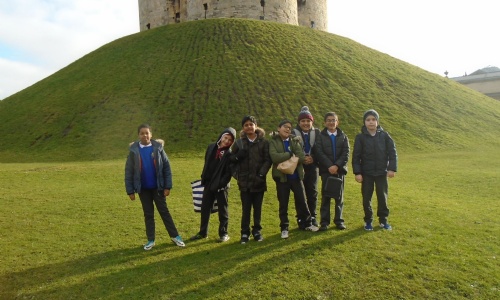 'In relation to their 'Peasants, Princes and Pesticides' Creative Curriculum unit, the Year 6 children went on a trip to York Dungeon on 2nd February 2017. We travelled back in time to when The Plague had spread across Europe - and had now reached York. We were guided to 'The Doctor's Surgery' where we came face to face with the 'Doctor's Assistant' who delighted in demonstrating the full effects of the Plague in a graphic, theatrical, worryingly enthusiastic and gory way.

It was but one of 10 live shows the children experienced. They met numerous sinister characters from York's gruesome past, including traitorous plotter Guy Fawkes and the infamous highwayman Dick Turpin.

Having laughed and screamed with the actors throughout their Dungeon tour, now it was our turn. Students were encouraged to get into character themselves by our professional performance team and show us just how convincing they can be. With our very own professional performance coaches hot from The York Dungeon shows, Year 6 had a fun-packed hour learning to portray the distinctive characters they’ve met on their journey.'