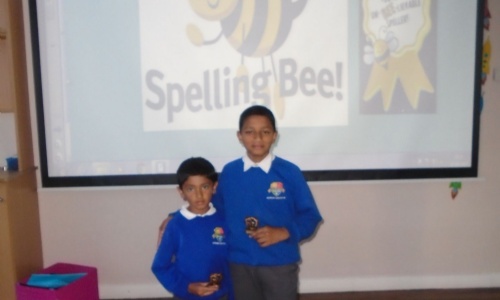 Last week we held our first Spelling Bee of the academic year. Before the summer break, children from years 1-6 were provided with a list of spellings from the national curriculum. All children's names were placed in a hat and their teacher selected a child at random to participate; two children from each class were selected.

After several heated rounds, Mufais from Year 6 was announced the winner for the Year 4 - Year 6 Spelling Bee, while Ebrahim Patel from Year 3 was victorious in the Year 1 - Year - 3 Spelling Bee. They were awarded with a trophy for their commitment.

Plans are already underway for next mid-term's spelling bee, where children will have twice as many spellings to learn. Lists will be given out on the week beginning 25 September