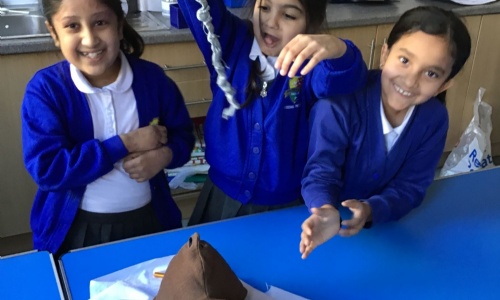 On Wednesday 19th January, year 3 visited Leeds City Museum.  After a short coach journey, we arrived at the grand museum.  We were excited to learn more about Ancient Egypt, and it wasn't long before we were impressing the guides with our knowledge of Tutankhamun!

Upstairs, we explored the museum's collection of Ancient Egyptian artefacts and learned how to mummify a body.  During the workshop, we were introduced to the 'Leeds Mummy'.  His name was Nesyamun and he was a priest.  Nesyanum was brought to Leeds in 1823 and was bought from an antique collector in London.  At the time, he was one of the best examples of a genuine Egyptian mummy!

We can learn a lot about Egyptians from the writing and the pictures on the outside of their coffins (sarcophagus).   For example, we know that Nesyanum lived during the reign of Pharaoh Ramesses XI between 1113 and 1085BC!

We all had a fantastic day and learned so many new facts!